iSTANBUL TOUR STUDIO
The Rise of the Byzantium tour goes beyond Constantinople’s monumental architectural legacy and focuses on the daily life of Constantinopolitans (Istanbulites) living in the Byzantine Era. https://www.istanbultourstudio.com/tours/the-rise-of-byzantium

Meeting at the hotel

See one of the Seven Wonders of the Ancient World, Temple of Artemis, along with ruins of different eras including the Classical, Hellenic, Roman, Ottoman.
$ 345 BOOK NOW
OVERVIEW 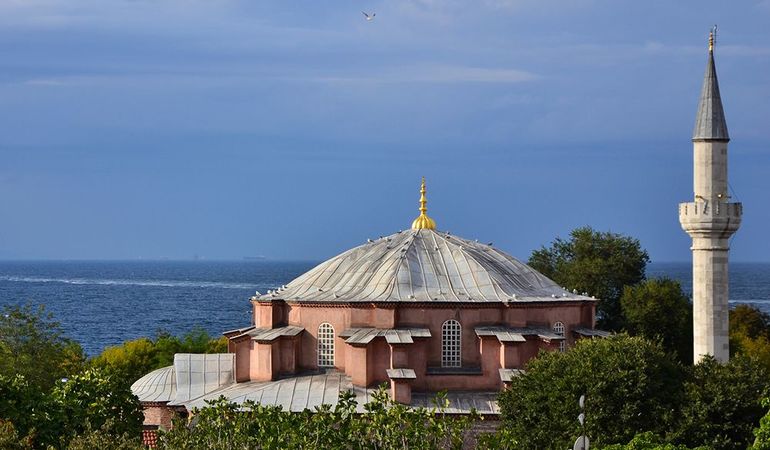 Istanbul, or Byzantium as it was called at the time, was the capital of the Eastern Roman Empire for more than 1000 years. The city was known with many different names such as Nova Roma (New Rome), Augusta Antonina, Constantinople and so on. Founded in 330 AD by Constantine the Great, Byzantium became one of the largest and richest cities in the world, and remained so until the 15th century. The Eastern Roman Empire or the Byzantine Empire as it has come to be known, built countless churches, palaces, infrastructure buildings, monastic complexes, columns, and other structures in and around Istanbul throughout history. The city was the center of trade, pilgrimage, education, trade, and diplomacy for many centuries under this empire.

Our “The Rise of the Byzantium” tour highlights not only Constantinople’s monumental architectural legacy, but also its ancient water systems, everyday life, public spaces (forums), celebrations, protests, religious life, as well as the palace life. On this special day, participants also learn about the colorful cultural landscape of the Byzantine Empire, just like their famous mosaics made from hundreds of different stones.

Pantokrator Monastery: The Monastery of Christ Pantokrator is located on a hill with beautiful views of the Golden Horn. Built in the 12th century, the stunning structure, which is now turned into a mosque, was a large monastic complex with a hospital. It was one of the most ambitious imperial undertakings of Constantinople following the reign of Justinian.

Valens Aqueduct Bridge: This 900 m long aqueduct bridge was built approximately 1650 years ago from large ashlar blocks during the reign of Byzantine Emperor Valens I. This bridge is only a small part of the once 250 km long system that brought fresh water from north of the city into the city’s historic marble drinking fountains that still remain to this day.Valens Aqueduct was repaired several times and functioned during the Ottoman Era as well until the 18th century.

Mystic world of ancient cisterns: There’s something almost mystical about entering the underground world of the historic cisterns that hide underneath the city. Unlike the world above-ground, these grand ruins are dressed in a deep silence that embraces visitors and very quietly tell them the tale of their past grandeur. It is estimated that there have been more than 200 underground cisterns in Istanbul and a few are open to visitors. You get to choose between two largest and most famous ones: Basilica Cistern, (Yerebatan Sarnıcı in Turkish) or Theodosius Cistern (Şerefiye Sarnıcı)

Byzantine Churches converted into mosques: After the conquest of Constantinople by the Ottomans in 1453 a great number of Byzantine churches were converted into mosques and they still function as mosques. In the scope of this tour, we will see several of them, which are free, underrated, and contain the architectural features of both Christian and Islamic architecture.

Ancient Forums of the Byzantium: Former Forum of Theodosius (Beyazıt Square), and former Forum of Constantine (Çemberlitaş) are the two historical sights that used to occupy the center of public life in Byzantium. They continue to be lively public squares of Istanbul.
Column of Constantine: Erected in 330 AD by Constantine I in order to commemorate the declaration of Constantinople as the new capital of the Roman Empire, this column is 35 m long and is made from several porphyry blocks, only found in Egypt.

Little Hagia Sophia: The original name of Little Hagia Sophia was “The Church of Saints Sergius and Bacchus” which was dedicated to two young saints: St. Sergius and St. Bacchus. This church, now converted to a mosque, was built in 536 CE by Justinian I and remains one of the most interesting examples of “church-mosques.”

Important Note: Some venues listed above will be seen from the exterior.

Who is this tour for?

Why book with Istanbul Tour Studio?

How much is the private Rise of the Byzantium tour per person?

See one of the Seven Wonders of the Ancient World, Temple of Artemis, along with ruins of different eras including the Classical, Hellenic, Roman, Ottoman.
$ 345 BOOK NOW