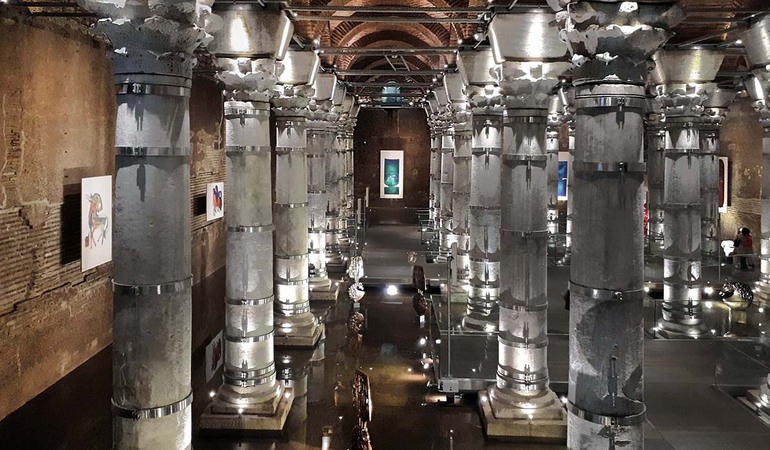 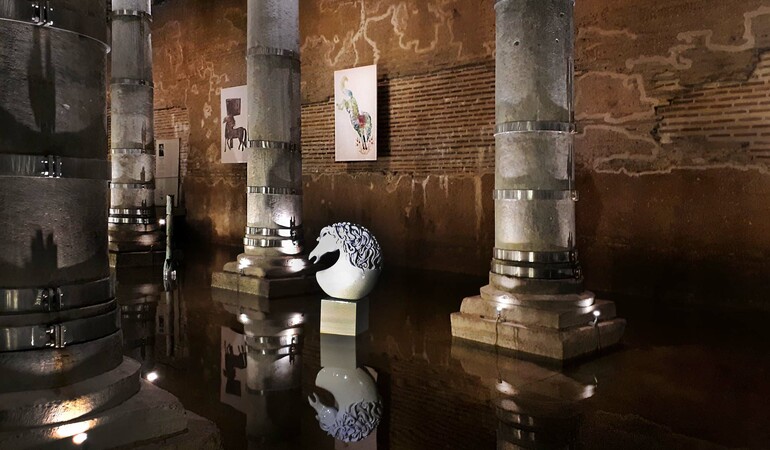 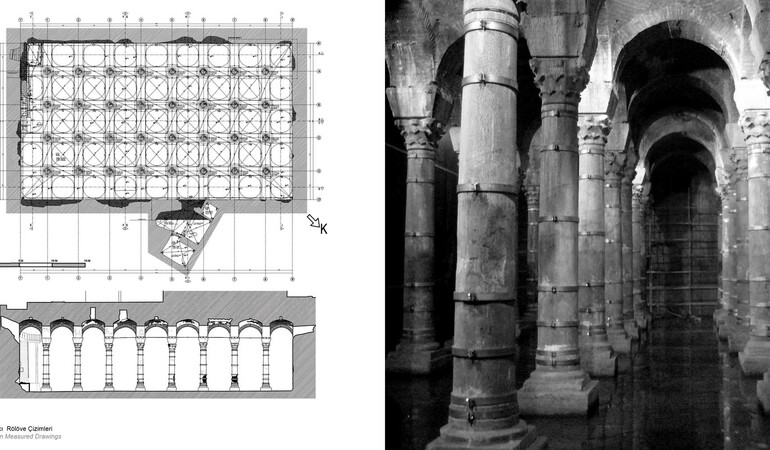 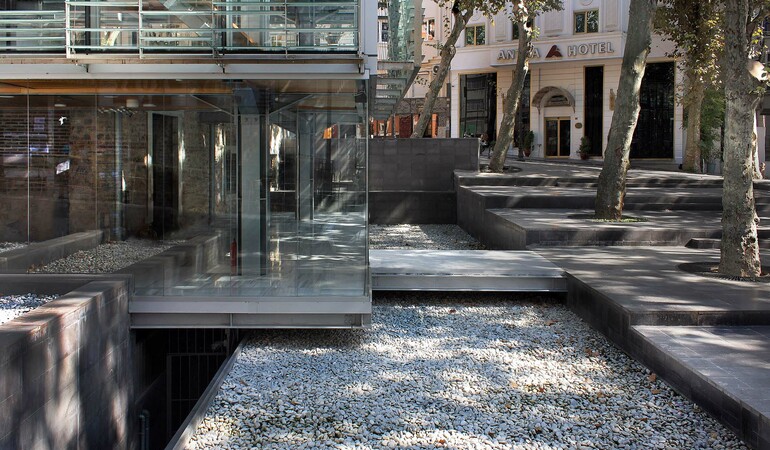 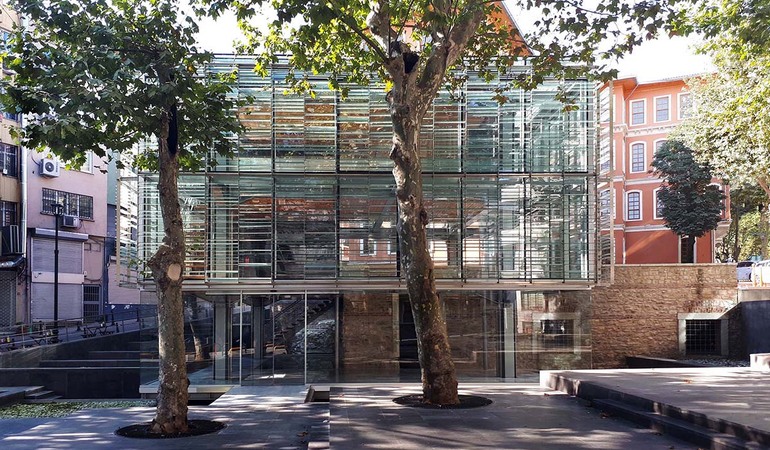 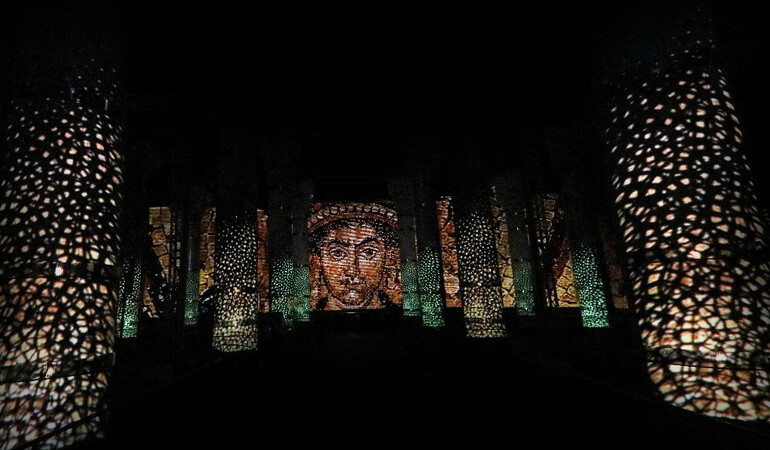 Although founded on a perfectly located peninsula surrounded by the sea, Istanbul lacked local springs and bringing fresh water from the woods at the outskirts of the city has always been an issue since Roman times. This water brought in by an amazing aqueduct system was then reserved in underground cisterns that were part of Constantinople’s amazing water supply system. Basilica Cistern (aka Underground Cistern) might be the grandest of these cisterns but Theodosius Cistern is surely the most surprising. Built on an area of 25 to 45 meters, the cistern reaches a height of 9 meters with vaulted ceilings carried by 32 marble columns.

Theodosius Cistern (Şerefiye Sarnıcı in Turkish) was (re)discovered accidentally when the Istanbul Metropolitan Municipality decided to demolish the building of Eminönü Town Hall in 2010. This formerly unknown 5th-century cistern opened the gates for tourists in 2018, after a meticulous restoration project that erected a modern steel and glass structure on top of it to welcome the visitors. The modern building (entrance) and square project was beautifully designed by Istanbul based architecture firm by Cafer Bozkurt Mimarlık. The modern building creates a stark but pleasant contrast with the ancient structure underneath, which hosts art exhibitions, cultural events and classical music concerts organized by the municipality for free! The book store and the coffee shop above the cistern are hidden gems for those who would like to take a break from their old city tours. 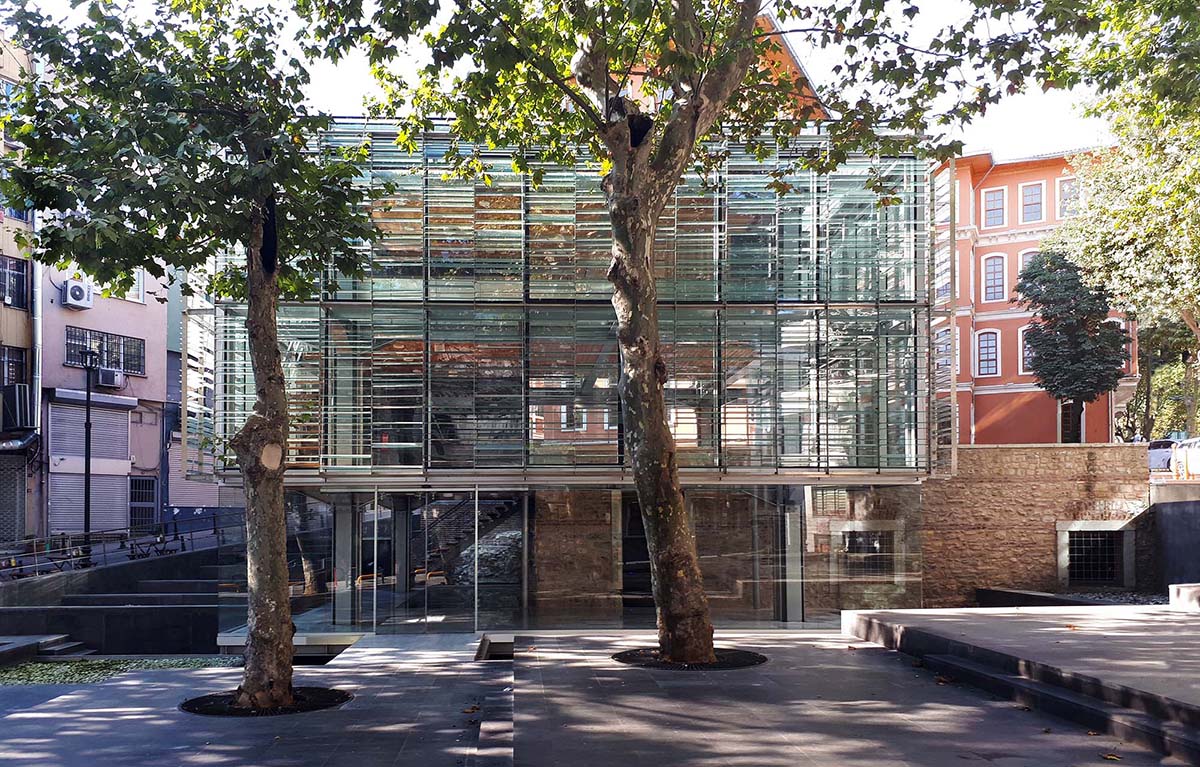 Amazing facts about the water supply system of Istanbul

Emperor Constantine I not only built the monumental city of Constantinapolis from a scratch but also the longest water conveyance system in the Roman Empire. The Byzantine emperors following him continued the task by adding numerous tunnels and 60 aqueducts to feed the Great Palace, as well as the public buildings and fountains. After the conquest of Constantinople by the Ottomans, the population of the city skyrocketed and the Architect Sinan expanded the historic water supply system by ambitious renovation work.

There is a 360° Projection Mapping show at the Theodosius Cistern that starts every hour. The twenty minute show is a retrospective visual celebration that goes through the magnificent past of Istanbul using light illustration and thematic background music.

How to get to the Theodosius Cistern?

Hint: An hourly show supported by 360° Projection-Mapping improves your perception of the cistern by 3D effects reflected on the walls, columns and ceiling. The show lasts approximately 10 minutes.

Note: The Museum Pass is not valid for the entries to this museum.

**Images are from an article about Theodosius Cistern's renovation by Cafer Bozkurt Mimarlık at Arkitera.

Experience the grandeur and exoticism of the Byzantine Empire and unleash the secrets of its millennium-long history in this full-day guided tour.
$ 120 BOOK NOW
Theodosius Cistern, Şerefiye Sarnıcı in Turkish, located in the hearth of Sultanahmet old city opened its gates for tourists in 2018, after a meticulous restoration project that erected a modern steel and glass structure on top of it to welcome the visitors. https://www.istanbultourstudio.com/tours/theodosius-cistern