Remember this mysterious and exotic underground cistern from the James Bond movie, From Russia with Love?

Known locally as Yerebatan Sarayi (meaning Sunken Palace) or Yerebatan Sarnici (Sunken Cistern), this underground water cistern was the major water reservoir of Constantinople. The water was transported from the Belgrade Forest by the immense Byzantine aqueducts (Valens Aqueducts). You can visit the Underground Cistern either with our One Day in Istanbul or Istanbul Layover Tour.

When was it built?

It was built during the reign of Emperor Constantine in the 4th Century but greatly enlarged by Justinian in 537 AD, and used as water storage for the Great Palace during Byzantine times and for the Topkapi Palace under the Ottomans.

How was the sunken cistern discovered?

It fell into disuse, but was rediscovered by Frenchman Petrus Gyllius in 1545, who revealed it after investigations he began when he found locals selling very fresh fish in the nearby streets – their houses were located above it and they had sunk wells into it and sometimes caught fish from it.

This eerie and atmospheric setting has attracted thriller writers across the ages. From seeing the Basilica Cistern James Bond rowed across in From Russia With Love (1963) to the exciting climax featuring Robert Langdon in Dan Brown's Inferno (2013), there can't be many locations as historical and unusual as this.

- There are 336 giant columns (mostly Ionic or Corinthian in style) supporting the structure in 12 rows of 28 columns.

- It's estimated that there were more than 80 underground cisterns in Istanbul, but this is the largest and the best excavated. 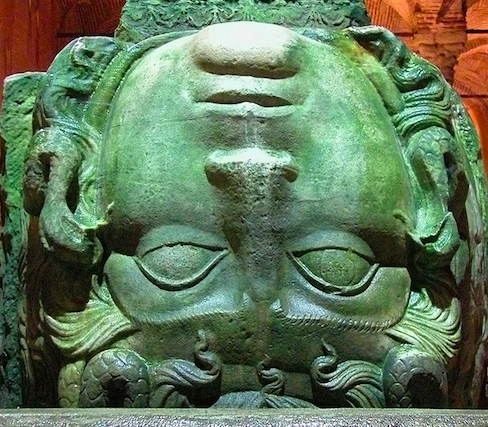 Upside down Medusa statue at the Underground Cistern of Istanbul

What Not To Miss at The Basilica Cistern

The two mammoth Medusa heads used as plinths in the far corner of the cistern. One Medusa statue sits is on its side while the other is upside down – supposedly to remove her powers. (In Greek mythology, Medusa was a female monster with snakes for hair, and anyone that looked into her eyes was instantly turned to stone.) Their origins are unknown, but thought to be removed from a Roman era building.

Stroll around the raised, uplit walkways and admire the carp swimming lazily in just a couple of feet of water below – the same water that these extreme wakeboarders tried riding.

What are the Basilica Cistern opening hours?

The Underground Cistern (aka Basilica Cistern) is currently closed due to renovations. Unofficial resources suggest that the reopening will be in early October.

How can I get to the Basilica Cistern Istanbul?

It is located in the heart of Sultanahmet, close to other sights such as the Blue Mosque, Topkapi Palace and the Hagia Sophia. Beware that there is sometimes a large queue.

Have you checked Topkapı Palace?

The Rise of Byzantium

Experience the grandeur and exoticism of the Byzantine Empire and unleash the secrets of its millennium-long history in this full-day guided tour.
$ 120 BOOK NOW
Known locally as Yerebatan Sarayi (meaning Sunken Palace) or Yerebatan Sarnici (Sunken or Underground Cistern), this underground water cistern was the major water reservoir of Constantinople. https://www.istanbultourstudio.com/tours/underground-cistern_museum